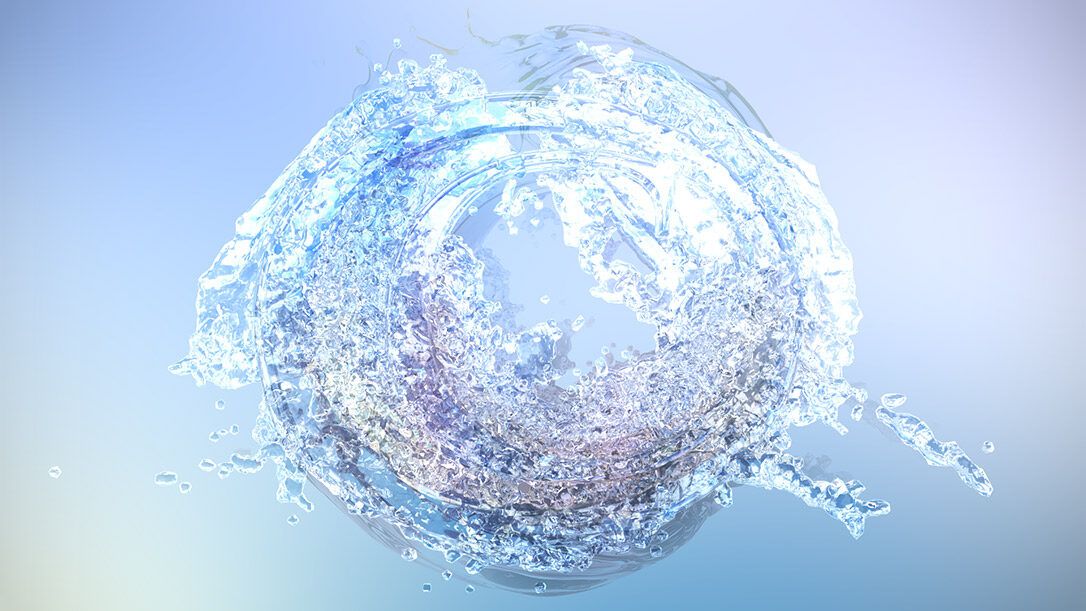 With clear long-term financial goals, we can explore how viable they might be with present circumstances taken into account.

In this case, three clear objectives have been set, together with our client (Addison and Sam, a married couple with two children):

Previously we established that with our client’s existing circumstances, it would be financially detrimental for Addison to retire at age 65. Both Addison and Sam would run out of liquid assets by age 79.

Are the couple open to downsizing later on in life? Could this help meet the set goals? Let’s take a look… 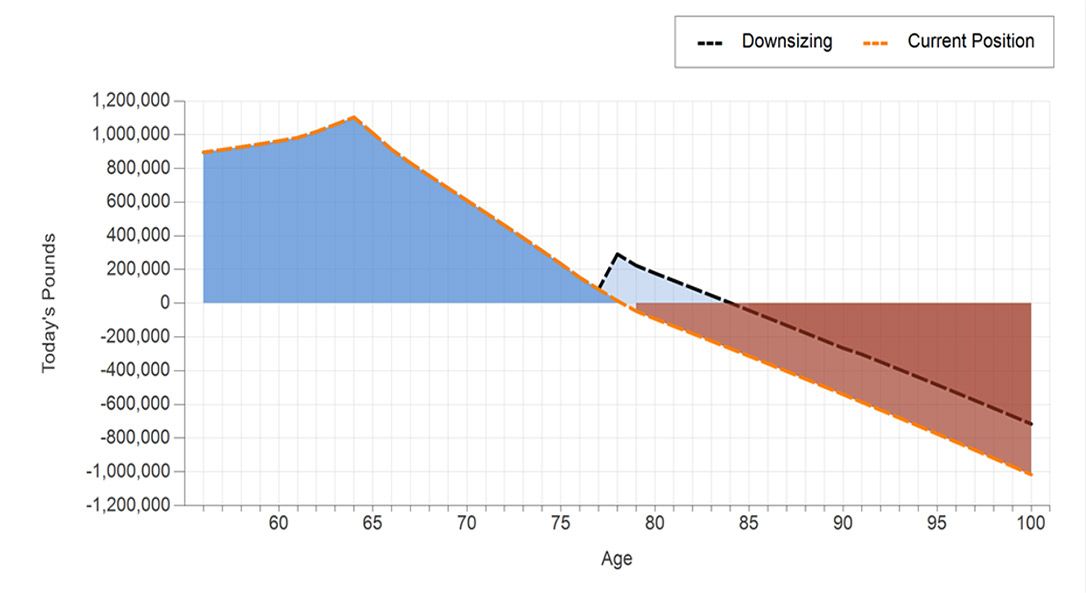 Having factored in the downsizing, the orange line above shows us the couple’s current position, against the black line which demonstrates that downsizing would allow them to continue meeting their expenditure requirements for roughly six more years (from age 78 to around age 84).

Addison and Sam see this and decide it would not be beneficial to sell their property. They would prefer to consider it later in life.

Could they take a more aggressive investment approach with existing assets?

The next discussion point is that the original forecast suggests Addison’s entire pension fund will be spent by age 77. Considering Addison’s pension, cash ISAs and other investments, what might be the impact on their cashflow if we increase potential investment return by increasing the level of risk?

Assumptions in this scenario 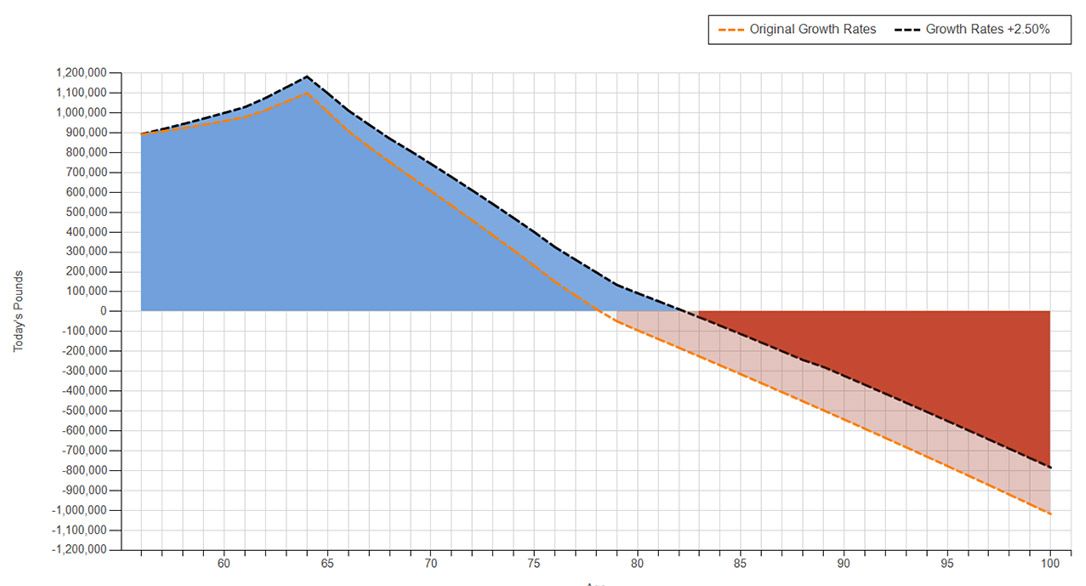 The orange line again shows the couple’s existing position against the black line, which represents an increase in the growth potential by 2.50% p/a.

If we make no changes to Addison’s pension, given that this matches their risk level, we see that by increasing the level of risk on the cash ISAs and investments, the point at which they’ll need to start drawing an income from the pension is delayed. This would allow Addison and Sam to continue meeting their expenditure requirements for a further four to five years (from age 78 to 82 – 83).

After considering the client’s expenditure, it became evident they had no ad hoc expenditure plans. Assessing expenditure needs can sometimes compel clients to consider other things they could be doing, or help them realise certain goals just aren’t financially viable.

If we consider Addison and Sam’s expenditure in detail, it would appear that their non-essential expenditure may be excessive. Therefore, let us look at what might happen if we reduce this.

Assumptions in this scenario

Addison and Sam agree that they could probably reduce their non-essential expenditure if they looked at it carefully, so we explore this together. Life between 65 – 80 seems an appropriate time to reduce annual non-expenditure as much as possible, with smaller reductions either side.

Once we revise the figures in our cashflow modelling, we see an obvious improvement in the client’s cash flow position:

Furthermore, the model doesn’t show the impact of Addison adding this money back into his pension, which would allow the client to continue meeting their expenditure requirements for a further 4 years or so (from age 78 to 82 – 83).

Addison and Sam accept they could take steps to reduce some non-essential expenditure and on reflection, decide they would like to plan a forty year wedding anniversary when Addison reaches 70. They estimate this will cost £10,000. We agree to build this into their plans.

We’ve been able to show Addison and Sam that no single solution will help them achieve their objective of retiring at 65 and, having considered all the options, Addison and Sam realise they’ll need to make some adjustments to their financial goals.

Through further discussion and guidance, the couple consider the following adjustments and ask us to assess the projected impact:

We can now see, through the course of discussions, goal-setting and exploration of various courses of action, by making the adjustments driven by the client’s expanded thinking, we can improve Addison and Sam’s cash flow position. Problems with exhaustion of assets arise around age 98, and this is something we will continue to monitor.

By making the adjustments, it has been possible to make the potential rate of return on their investments balance the rate of withdrawals offering a sustainable cashflow.

As a reminder, the cashflow journey requires various assumptions and can never truly replicate real life. With refined financial goals and the journey ahead, we’ll conduct ongoing reviews together with the family, to ensure plans remain on track.

What about the kids?

One of the goals for Addison and Sam, if possible, was to support their children with purchases of their first homes. This is something that could now become achievable and something we can work through in ongoing meetings.

We have the tools to simulate one further test on Addison and Sam’s cash flow: the impact of a market crash. If we assume a market crash of 30% at the beginning of the period with a recovery period of 10 years, we can consider how this might affect the cashflow forecast.

We see that even with a 30% drop, demonstrated by the orange line, Addison and Sam can still achieve their goal of retiring at age 65.

Cashflow modelling is an incredibly flexible tool – accommodating all kinds of circumstances and objectives. The beauty of the tool is that it is all exploratory and allows us to expand discussions and put ideas to the test. Situations can be explored, analysed and taken further or simply cast aside in favour of new ideas. There is no commitment involved and in fact, a little eye into the road ahead often pops up some interesting conversations and considerations among the families we meet and support.