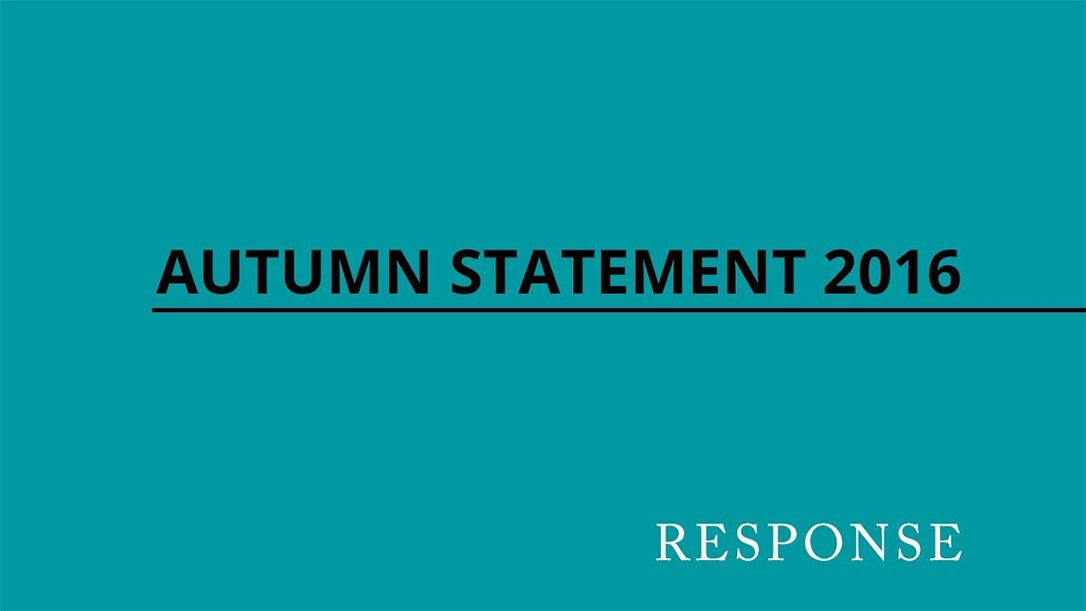 Chancellor Philip Hammond delivered his first Autumn Statement today. He began by citing the IMF’s (International Monetary Fund) prediction that the UK economy would be the fastest growing major advanced economy in the world this year. Employment is at a record high and unemployment is at an eleven year low, with 2.7 million new jobs having been created since 2010. However the outcome of the EU referendum earlier in the year has brought about fresh layers of uncertainty.

The growth forecast for the UK economy is now 2.1% in 2016 – higher than originally forecast – but the 2017 growth forecast has fallen from 2.2% to 1.4%, due to lower investment caused by weaker consumer demand and higher inflation. This will then rise to 1.7% in 2018 and 2.1% in 2019 and 2020. Debt is forecast to rise from 84.2% of GDP (Gross Domestic Product) last year to 87.3% this year, before peaking at 90.2% in 2017/18 as monetary policy interventions approach their full effect. Hammond admitted that the Government was no longer seeking a surplus by 2019, rather they were looking for public finances to be returned to balance ‘as early as possible’ in the next Parliament

One key issue raised by the Chancellor was the sizeable productivity gap between the UK and other developed nations. Productivity in the UK lags that of the US and Germany by 30 percentage points. As a result, Hammond unveiled a £23 billion National Productivity Investment Fund which would be spent on innovation and infrastructure over the next five years. This includes a £1 billion investment in digital infrastructure, as the UK aims to become a world leader in 5G technology.

Earlier today the UK market opened strongly, with the FTSE 100 rising nearly 1% by 9:30. The FTSE was still up while Hammond presented his statement, but began to fall when Shadow Chancellor John McDonnell delivered his response, saying the Statement offered ‘no hope for the future’. This is only a small burst of volatility, and our overriding impression of Hammond’s first Autumn Statement is positive, particularly with regards to the investment in infrastructure and especially given the inevitable challenges caused by the Brexit vote.

On the subject of pensions, the Chancellor was mercifully quite quiet, with only one or two white rabbits.

As anticipated, the use of salary sacrifice will be banned from April 2017 but, crucially, the most popular uses dodge the bullet; pensions, cycle-to-work schemes and childcare vouchers. Also exempt are arrangements used to purchase ultra-low emission cars. Existing arrangements for most other employee perks will be allowed to continue until April 2018, while arrangements used for accommodation and school fees will be protected until 2021. We view this as a positive step – we’d prefer to see the use of salary exchange focussed on the most fundamental benefits rather than risk it being removed altogether at some future date.

Mr Hammond also announced a ban on pension cold calling, together with a consultation on how best to tackle pension scams, a scourge which has been on the rise for some time. Firms will no longer be able to contact pension members where they do not have a pre-existing relationship. Again, this is a hugely positive step. The pension freedoms introduced in 2015 were a welcome relaxation of the rules but they did make it easier for fraudsters to separate innocent people from their pension savings. We would welcome aggressive legislation to tackle pension scams since they can have a devastating effect on those caught out, disproportionately the elderly and vulnerable.

One unexpected announcement was that from next year the Money Purchase Annual Allowance (MPAA) will reduce from £10,000 to £4,000. The MPAA is the maximum amount you can pay into your pension each tax year if you have previously accessed any money via the new pension freedoms introduced in 2015. The idea behind the original MPAA was to limit the opportunity for people to abuse the generous tax allowances afforded to pensions. Without such a cap, there would be nothing to stop you from putting up to £40,000 of your salary into a pension each year then withdrawing it again, 25% tax-free. The government clearly felt that £10,000 still allowed too much scope for abuse, hence the reduction next year. We are quite neutral on this one. Under normal circumstances, people who access their funds flexibly don’t want to make further contributions because they are busy settling into retirement. We therefore don’t anticipate this being a major issue, but it is yet another rule to have to remember.

As expected, Corporation Tax is set to reduce from 20% to just 17% by 2020, no doubt in part to encourage businesses to stick with the UK post Brexit. Regardless of motive, it will be a welcome change for all UK businesses.

I noted with interest one line within the text of the Autumn Statement, unrelated to pensions but interesting none-the-less. From next year, people will be able to claim new Tax Credits via digital devices. Welcome to the 21st Century, DWP! Let’s hope this is the start of a digital revolution within government!

This was the first and officially last Autumn Statement by Phillip Hammond…It is however just a bit of a switch around, whereby the main budget, normally held annually in March, will now be held in November, with a new Spring Statement being announced.

So to hopefully simplify a confusing announcement by Phillip Hammond:-

This will allow more time for the subsequent changes required by Businesses, Individuals and the Government to be implemented, before the start of each new tax year.

It was already previously announced that the Income Tax Personal Allowance currently at £11,000 is to increase to £11,500 in April 2017, with the higher rate income tax threshold now set to increase to £50,000, by the end of the Parliament.

There was little coverage of personal pensions or investments, however a new savings account will be launched through National Savings & Investments for those aged 16 and above. This will be fixed for 3 years and will allow savers to receive interest of 2.2%, with a maximum investment limit of £3,000, effective from the spring of 2017.

The general focus of this statement was Government spending on infrastructure. In particular around affordable housing, whereby up to £2.3 billion will be available to help provide 100,000 new homes in high demand areas, and £1.4 billion for up to 40,000 extra affordable homes.

Much of the budget is related to information already known, so there were no major shocks or surprises, however the devil is always in the detail, which COURTIERS will be looking into over the coming weeks.